Local and regional authorities are critical for turning the global vision for peaceful, just and inclusive societies into a local reality

“Localizing” SDG16+ refers to the process of adapting, implementing, monitoring and reporting on SDG16+ targets at the local level. Localization relates both to how local and regional governments can support the achievement of the SDGs through action from the bottom up, as well as how the SDGs can provide a framework for local development policy.1 It is a process that seeks “to empower all local stakeholders, aimed at making development more responsive and therefore, relevant to local needs and aspirations.”2

Local and regional authorities, with strong, democratic and accountable institutions, are critical for turning the global vision for peaceful, just and inclusive societies into a local reality.4 All of the SDGs – including SDG 16 – have targets directly related to the responsibilities of local and regional governments, especially in their role in delivering key public and basic services. Local and regional authorities can also play an important role in representing the interests of local communities at the national level, providing localized data on SDG progress and facilitating the kind of inclusive and participatory public decision-making processes envisioned by SDG16+.5

The role of local and regional authorities in implementing SDG16+ will depend, in part, on the extent to which they have the power to make decisions to advance peace, justice and inclusion.  Where local and regional actors enjoy substantial autonomy or independence from national governments, or where they are directly supported by national governments to engage in SDG16+ implementation – both politically and financially – their potential contribution to peace, justice and inclusion will be greater.6 However, where these authorities operate within a highly centralized country or require formal legal authority to work on SDG16+ targets,7 their ability to contribute to SDG16+ implementation will be more limited. 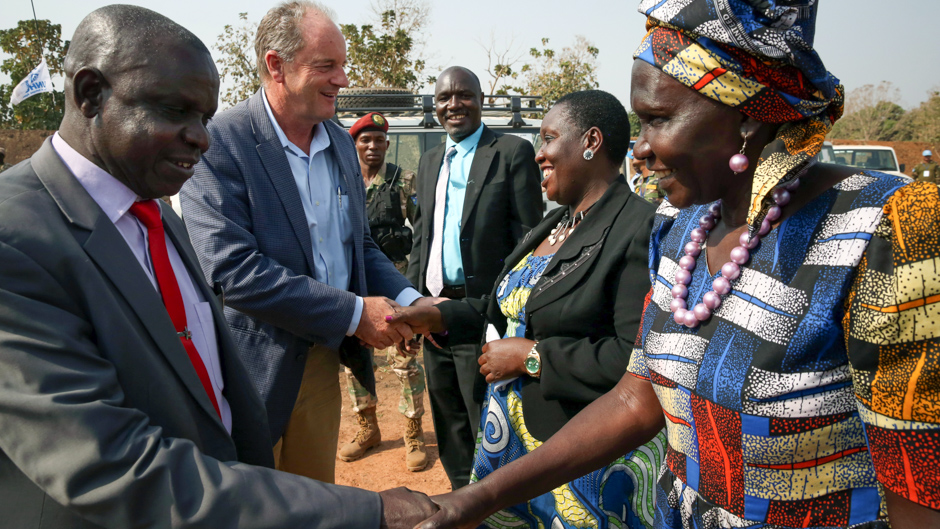 While there is no single blueprint for translating SDG16+ into action at the local level,8 you can help to mobilize and support local and regional authorities to engage in SDG16+ implementation through the following actions:

“Our process was about the locals; it was about ownership; it brought many people together and their involvement was the key. It was about helping new plants grow in the soil that was already there, rather than bringing in new soil.” – Guleid Jama, Founder and Board Member, Human Rights Centre Somaliland

Through an extensive and consultative process, the Somaliland SDG16+ Coalition has helped to support and drive SDG16+ localization, generating buy-in across civil society and national and local government, and using its 2019 baseline report to measure progress and maintain focus on reaching SDG16+ targets.

While it has endorsed the 2030 Agenda and integrated the SDGs into its national development plan, Somaliland has never presented a VNR largely due to its unrecognized status. Civil society actors decided to fill this gap and lead the process themselves, producing the ‘Somaliland SDG16+ Civil Society Progress Report’ in 2019.18 Over two years (2017-2018), civil society carried out a detailed review of progress towards achieving SDG16+ priority targets and related processes, holding workshops throughout Somaliland with 55 different CSOs representing women’s groups, youth groups, those focusing on minority rights, disability groups and others. Efforts to identify and mobilize champions within the government were also prioritized, focusing on the Office of the Chief Justice of Somaliland, the Ministry of Justice and the Ministry of National Planning and Development – all critical for SDG16+ implementation.

By the end of 2018, the Chief Justice, the Justice Minister, officials from the Ministry of Planning and the Attorney General’s Office had made public statements about SDG16+ or included it in their work plans.

The next step was to translate SDG16+ commitments into action, using the 2019 baseline report to track and incentivize progress.19 Reflective of the report’s recommendations, the following actions have been taken:20

The Somaliland SDG16+ Coalition has also helped localize the ‘Peace in Our Cities’ campaign, working with the Mayor of Hargeisa to endorse the campaign and implement SDG target 16.1.22The Coalition has also reached out to other cities, Borama and Las Anod, to join and share in lessons learned.

Key Take-aways: Civil society groups used the process of developing and following up on the 2019 baseline report to promote civil society inclusion in SDG16+ efforts nationally and locally, with civil society evidence used with official data. The 2019 report has helped to ensure that commitments made to implementing SDG16+ are kept and remain localized, that shortcomings are highlighted and that there is a way to measure future progress.

“The main take-away is not to sit back and wait for the government to involve you in the process, but, as civil society, to take the extra step to lead and work with all stakeholders, including the government, to localize SDG16+ and implement its commitments,” explains Abdijalil Tahir, Somaliland SDG 16+ Coalition.

This resource provides policy guidance, case studies and good practices on advancing SDG 16 at national and subnational levels by more effectively leveraging the Voluntary National Review (VNR) and post-VNR processes. It contains a chapter on ‘Localizing VNR Findings through Subnational and Local Governments and Other Stakeholders.’ Available at: https://www.sdg16hub.org/topic/mainstreaming-sdg-16-using-voluntary-national-review-advance-more-peaceful-just-and-inclusive 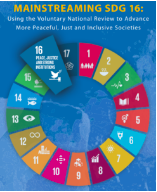 This network and online platform supports the on-the-ground delivery of the SDGs, with a focus on those furthest behind. An extensive range of resources, tools and information to support SDG localization are provided. Available in English, French and Spanish.

This short publication explains how each of the 17 SDGs relates to the daily work of local and regional governments. It lists the most relevant targets of each Goal to local governments and highlights the relationship between the Goals and other international agendas, such as climate change and Habitat III. Available in English, French and Spanish.

This handbook aims to help practitioners at a municipal level improve their knowledge and understanding of the 2030 Agenda and the SDGs, and build their capacity to promote the SDGs and sensitize other stakeholders. It includes chapters on the impact of the SDGs in municipalities, raising awareness on the SDGs, establishing a local SDG agenda and the role of Local Government Associations (LGAs) and the Network of Associations of Local Authorities in South-East Europe (NALAS) in mobilizing municipalities to achieve the SDGs. Tools and examples from various countries are provided.

This guide provides information on the SDGs to local and regional governments – and their organizations or networks – and equips them with a series of strategies, skills and knowledge to localize the Goals. The material is provided in the framework of learning sessions in order to encourage participatory and group work and promote the exchange of ideas and experiences. Available in English, Spanish and/or Portuguese.

Towards the Localization of the SDGs (Global Taskforce of Local and Regional Governments and United Cities and Local Governments (UCLG), multiple years)

This series of annual reports to the High-level Political Forum on Sustainable Development (HLPF) reviews the state of localization around the world.

This initiative provides a platform for local governments and civil society partners across the world to come together to make their governments more open, inclusive and responsive, modeling the values and principles of the Open Government Declaration and processes.

This online platform provides a range of information on cities and regions taking a lead on Voluntary Local Reviews (VLRs).

Free, Prior and Informed Consent (FPIC). An Indigenous peoples’ right and a good practice for local communities (FAO, 2019)

This e-learning course focuses on how to practically operationalize Indigenous peoples’ right to free, prior and informed consent throughout all stages of a project cycle. It is primarily intended for professionals directly engaged in the development and implementation of projects involving Indigenous peoples. Available in English, French and Spanish.